Here is the picture which represents for me the Sant Gervasi-Galavany neighborhood of Barcelona. It is the statue of the Timbaler del Bruc. During the battle against the French troops, in 1808, during the War of Independence, the Catalan drummer boy played with such force and passion that the sound of the drum rolls echoed throughout the mountain of Montserrat. As a result, the French soldiers thought they were outnumbered by the Catalan army, and lost the battle. 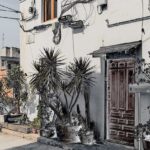 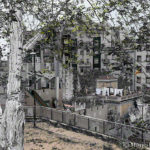